Retention comes from the Latin word ‘retinere’, which means to hold back. In the context of building drainage, retention is used to slow down the outflow of storm water from a building, and thus make it act more like an undeveloped catchment, reducing the strain on the downstream infrastructure.

Sita Bauelemente is at the forefront of developing retention technologies, with its own custom designed outlet retention component, specifically designed to suit the company’s range of flat roof outlets.

So, what do we do with large volumes of rainfall which many sewer systems simply cannot handle? Increased extreme rainfall events, the effect of climate change on our weather patterns and increasingly impermeable surfaces over much of our urban areas have created a problem which local authorities have responded to by imposing discharge restrictions on new and re-developed sites.

This is particularly problematic in the UK, because we have so many combined sewers, installed in Victorian times, where untreated foul drainage is mixed with rainwater in the pipework.  When these flood, untreated sewage can spill out into river systems causing severe environmental damage, for which the water utility companies are heavily fined.

Over the past 15-20 years, the requirements to restrict discharge from sites has gradually tightened, with now even like for like replacement buildings in London and other major cities requiring significant reductions in discharge. In the very densely developed areas of our cities, landscape-based water retention features such as ponds and basins are not practical, as the building often covers 100% of the developed area, and thus a solution within the building footprint is required.  This can mean an expensive tank within the basement, or a solution at roof level, at the very source of the rainfall run-off.

Although green roof surfaces can act as a water storage system to allow some water storage, with patterns of UK winter rainfall, it has to be assumed that these will be fully saturated prior to any event which may require to be retained (or attenuated as it is often called in the UK).

To provide for a more formal, measurable and reliable retention at roof level, slowing down the natural water flow and helping to manage extreme rainwater volumes, the concept of the blue roof was developed.

Outlets at roof level are reduced in capacity by the use of a special flow control device, such that water discharges from the roof at a much slower rate, meeting the mandated site discharge requirements. This causes water to slowly build up in a specially created void layer on the roof, which is usually designed to fill up and then empty again in no more than 24 hours.

The use of roof level retention to answer to the challenges posed by the need to reduce building run off as a result of urbanisation and climate change is increasing in demand, but currently there are no universally adopted guidelines, standards or calculation systems for designing a retention on a particular flat roof.

Sita has developed its own calculation method to allow the safe design of a retention drainage system, based on UK drainage industry good practice for the design of underground attenuation systems.

This divides the desired storm event up into a series of tiny steps between five minutes and 48 hours, then assesses for each time step, the total inflow, total outflow, and thus volume stored. By using this technique, a critical rainfall duration can be found for the roof, which will vary between ten minutes and 12 hours depending on the ratio of catchment area to allowable peak outflow.

The outflow is controlled by the specially developed SitaMore retention component. Depending on the target outflow, each retention module may utilise between one and 12 outlet holes, by varying the number of holes per outlets and total number of outlets, a wide variety of discharge flows can be achieved.

In the UK, two sets of rainfall data have historically been used for designing retention systems. The Flood Studies Report data (FSR) is based on data collected between the 1940’s and 1975 – when it was published and was historically the main tool for designing urban drainage systems. In 1999, the Flood Estimation Handbook (FEH) was published, which mostly superseded FSR for urban drainage design. However, in its first edition, it could not predict events below 30-minute duration, and thus FSR was still often used for the design of blue roofs, which could often have shorter critical durations of storms. In 2013, a new FEH data set and method of calculation was published, which allowed events down to five minutes to be calculated, and thus the FEH method now has to be seen as the correct rainfall data to use for all retention design, including blue roofs.

Every SitaMore flow control outlet has a built in emergency overflow, which will be set at the maximum storage depth, such that should a blockage occur, or the design rainfall event be exceeded, water can be safely conveyed away from the roof without any danger of overflow into the building, or excessive structural loadings.

Controlled rain retention is achieved using the specially designed SitaMore Retention component. This controlled flow module with a high-density polyethylene (HDPE) retention cylinder can be used with more or fewer discharge openings, depending on the required outflow rate. Thanks to a surrounding triple-lip seal, it can be installed quickly and easily in the roof outlet. The controlled flow module is compatible with the SitaIndra horizontal drain, the fully insulated SitaStandard or the cast iron SitaMulti.

The combination of the calculation methods used, an in-house calculation service and well proven and tested products provides a holistic approach to retention and one which is aimed at the fully supporting the use of blue roof retention in the construction industry.

By creating its own flow control devices and calculation methods, Sita provides a one-stop solution for blue roof design, which can allow building designers to cope with worst-case storm events safely and efficiently at roof level. 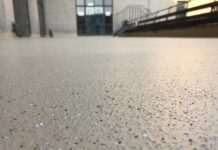 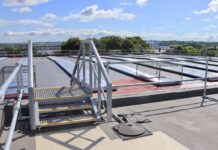 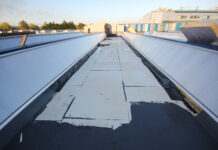