The Middlesbrough Institute of Modern Art’s (MIMA) has taken time to ensure that its roof remains waterproof and able to withstand the often harsh North-East weather.

Since 2007 operating as an art museum and gallery in Centre Square, Middlesbrough, it has been part of Teesside University  since 2014 and is now also a creative resource and cultural hub of MIMA School of Art and Design. In an impressive contemporary building rising 16.5m and clad in Turkish limestone, MIMA’s current single-ply roofing system had lost its elasticity.

In March 2021, StructureCare embarked on a four-week full roof waterproofing scheme on the weather-worn flat roof. “StructureCare was appointed via an open tender undertaken by Teesside University, evaluated on both quality and price,” explained the University’s project manager, Ian Atkinson.

StructureCare provided an alternative system for consideration by the University, which it deemed suitable to ensure the continued protection of the MIMA Building.

Before starting work, StructureCare carried out pull-off adhesion tests to ensure that the existing single ply system could be overcoated with the chosen TOR Elastaseal Z system. StructureCare chose this product as it is a leading liquid waterproofing solution that is quick to apply on existing roofs with weather-worn substrates and is particularly beneficial as a long-term solution to commercial buildings with flat roofs.

A detailed moisture mapping survey was also undertaken to identify areas of saturated insulation, which were removed and replaced as part of the works.

John Martin, business manager of WTI, oversaw the project for StructureCare and explained that the design of the building required the installation of a permanent latchway fall arrest system to ensure safe working. “Our installation team worked in full harness and fall arrest equipment on the roof area and the sloping canopy section. Despite the challenging weather conditions on the 19m high roof, the work ensures that the museum’s artworks continue to be protected and we managed to complete the project within the four-week deadline.”

Ian concluded: “From the pre-start meeting through to final completion, StructureCare management and on-site operatives worked very closely with me and MIMA staff, maintaining a good daily dialogue to ensure potential issues were evaluated and addressed.

“Work was undertaken diligently and always in compliance with submitted RAMS and the University’s specific requirements. I would not have any hesitation in using StructureCare again on any future University roofing project.” 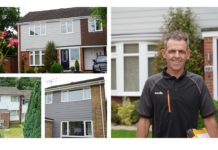 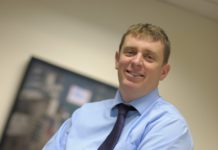 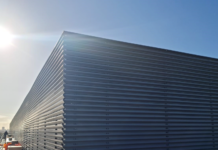 SureClad system is a sure bet for students