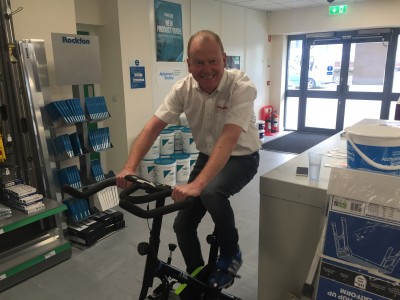 Colleagues from the Didcot, Reading and Cardiff branches of CCF have recently challenged themselves with a gruelling 19 days of cycling to raise a combined total of over £2,550 in-support of the Alzheimer’s Society.

The team of CCF colleagues took it in turns to put foot to pedal on a static bike inside the three CCF branches to reach the 2008 miles target, which is the total distance between all 40 CCF branches in the UK.

The money raised will help towards improving the quality of life of the people affected by dementia in England, Wales and Northern Ireland.

Ben Thurland, branch manager at CCF Didcot, said: “The charity cycle was certainly a challenge, but for such a worthwhile cause that it didn’t even matter how uncomfortable the bike seats were! We’d like to thank our colleagues across the CCF network, customers and suppliers for all the support, encouragement and donations we’ve received. It was a great experience and the money raised all helps to make a difference to those affected by dementia.”

Aimee Maguet, senior regional dundraiser at the Alzheimer’s Society, said: “Around 225,000 people develop dementia every year – that’s the equivalent to one person every three minutes.  Innovative corporate fundraising such as CCF’s incredible charity cycle provides vital support to the Alzheimer’s Society, which is the largest charity for people affected by dementia in the UK. Thank you so much to the colleagues at CCF for taking on such a brilliant challenge!”

In an attempt to help raise as much money as possible for CCF’s nominated charity Alzheimer’s Society, the CCF branch network will be taking on various fundraising activities throughout the year.