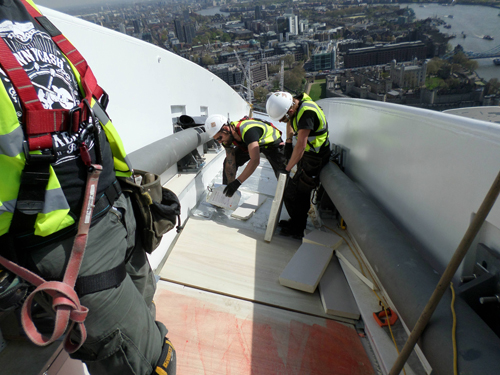 On April 6 2015, a new version of the Construction (Design and Management) Regulations (CDM 2015) was introduced by the Health and Safety Executive (HSE). As we are now coming to the end of the transitional period between the old procedures and the new, are you confident that everyone involved in your construction project knows their responsibilities? It is vital that the profession is ready to work within this revised framework, as failing to follow the regulations could result in prosecution.

These CDM regulations effect almost everybody involved in construction, including clients, designers and contractors – referred to as ‘duty holders’ – from the start of a project to final demolition, and are applied to all sites.

An update of the original regulations, introduced in 2007 as a means of improving health and safety on UK construction sites, CDM 2015 has a greater focus on smaller projects, as well as placing new obligations on clients and facilities managers. Changes include extending the scope of the regulations to include domestic clients, removing the role of the CDM coordinator and introducing a new duty holder, the principal designer. A principal designer and principal contractor must now be appointed on all schemes where two or more contractors are on site.

The HSE recognised that there would be construction projects that started before the CDM 2015 regulations came into force, and that would continue beyond that date. For these projects, with more than one contractor involved, the transitional arrangements have applied, but these came to an end at the beginning of October.

As these transitional obligations have now come to an end, all projects should be operating under the new CDM 2015 regulations and all principle designers should be in place. It is extremely important that all parties are aware of the exact details of these regulations, in order to protect and reduce the risk of harm to those who have to build, use and maintain structures. Anything that helps to reduce accidents is to be encouraged – especially when, even with the reduction in fatalities over the last four decades, there are still over 40 deaths annually on construction sites. This is well above other sectors when calculated on a per employee basis – around 31% against a 5% average for all employees in Great Britain.

Where a roofing manufacturer is giving design and specification advice, it is our duty to inform the client of its responsibilities under the regulations. But what is the obligation of the other parties involved in a project? Make sure you’re up to date with Sika Sarnafil’s quick guide to CDM 2015.

The client
Under CDM 2007, the CDM coordinator was the client’s key safety adviser. The removal of this role therefore has a significant impact on project safety governance. If you are a client, you must make suitable arrangements for managing a project, including the allocation of time and other resources. Clients’ key responsibilities include:

Perhaps the client’s most important duty is to appoint a principal designer and principal contractor, which are mandatory on projects with more than one contractor. In practice, these duty holders will carry out many of the functions listed above – although it is still the client’s duty to ensure that they are performing their roles. The client must make these two appointments ‘as soon as practicable’. In particular, the principal designer should be appointed as early as possible in the design process, ideally at concept stage. This will help the client to pull together the preconstruction information, such as asbestos surveys, existing health and safety files and structural drawings. Failure to make these appointments will see their duties transfer automatically to the client.

The principal designer does not need to be the lead designer on the project, and it should never be assumed that the lead designer takes on this role by default – the appointment must be made in writing. CDM 2015 includes in its definition of designers: ‘architects, architectural technologists, consulting engineers, quantity surveyors, interior designers, temporary works engineers, chartered surveyors, technicians or anyone who specifies or alters a design’. It also states that the principal designer must be ‘an organisation or an individual with sufficient knowledge, experience and ability to carry out the role’.

Notification threshold
Under CDM 2015, the HSE will need to be notified about projects exceeding 500 person days or ‘longer than 30 working days’ with ‘more than 20 workers working simultaneously’. This should have the effect of reducing the number of notifiable projects. The easiest way to notify any project to the HSE or other relevant enforcing authority is to use the online notification form F10 on the HSE’s website. It is important to note that clients, designers and contractors still have responsibilities for those projects for which the HSE does not require notification.

Eye-catching solution to a range of complex roof installations

The hot topic in managing risk