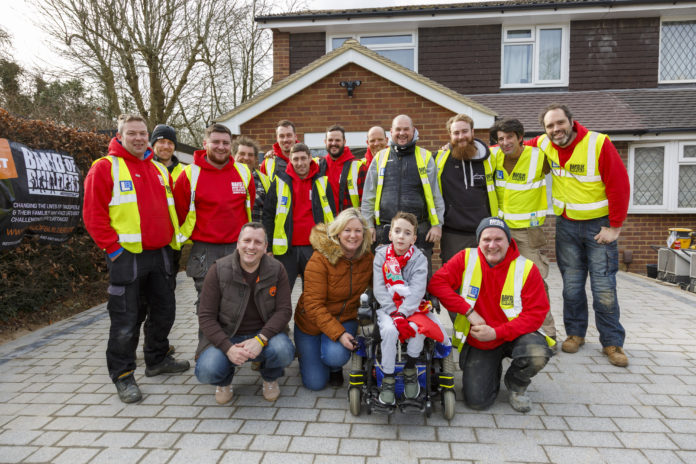 Band of Builders, a national charity that helps tradespeople and their families, have pulled together to help James Dodd, an 11-year-old who suffers from a rare mitochondrial disease, which has confined him to a wheelchair, unable to hold a pencil and struggling to speak.

After hearing about the family’s situation, Band of Builders stepped in to create a ramp at the front of their home as well as a porch extension to allow James to get in and out more easily.

James’ dad Iain, a plasterer, said: “A ramp might not sound like much, but this will make a huge difference to us. James can’t walk and struggles with balance, so getting him in and out of the house at the moment is incredibly difficult and having to contend with extra challenges like that day-in, day-out, really does take it out of all of us.”

Despite being born a healthy baby in 2008, in December 2011, James was rushed to hospital with tonsillitis and suffered what his family believed was a seizure. After recovering, staff at his pre-school noticed James was holding his arm strangely, while his parents also noticed he was falling over a lot.

Doctors initially thought James was suffering from cerebral palsy but after months of tests, he was diagnosed in October 2012 with mitochondrial disease. The following year, his condition was finally confirmed with a diagnosis of complex IV deficiency also known as Leigh’s. James’ family have been told that this is a life limiting condition for which there is no treatment or cure.

Andrew Pell, project lead on James’ Project, said: “We’re thrilled to be able to help James and his family. We were initially due to start this project in January but came up against a bit of a stumbling block – namely a large drainage pipe exactly where we were digging the footings.”

Over the eight days of the project, 17 volunteers from Band of Builders carried out the work to the Dodds’ home, giving up their time for free and using materials donated by various companies in the construction sector. They will reveal the project to James and his family on Sunday, April 5.

The truth about dry verge