A Blackdown green roof from Alumasc has been used at the new School of Architecture and Construction at The University of Greenwich.

Officially opened in December 2014, the œ78m new build development is based in Stockwell Street within Maritime Greenwich on the UNESCO World Heritage Site. The new facility includes a new library as well as a series of terraced roofs comprising 14 interlinked teaching gardens, forming the largest multifunctional roof space in London.

A total of 3,407m2 of green roofing system from Alumasc was specified by architects, Heneghan Peng, and landscape architects Allen Scott, to facilitate the design.

The new building had to be ?demonstrably sustainable’ in the sense that both it and its facilities, minimise their environmental impact and use of resources. Alumasc says the Blackdown green roof system creates a living laboratory where the sustainability of new ideas in landscape and architecture can be tested, and innovations developed and applied.

“Our design proposals had to reflect the location’s status as a UNESCO World Heritage site while remaining sensitive to the neighbouring buildings, particularly the residences to the rear of the site. Incorporating the interlinked landscaped roofs allowed us a creative approach in dealing with these challenges.

“The green roof system underpins all of the landscaping on the roofs. We see it as the base infrastructure that allows for either soft or hard landscaping permutations. This proved very useful as the design progressed with different planting options, and we were secure in the knowledge that the green roof system would be able to accommodate them. The zero-fall system also allowed us to achieve very large spans and roof areas with minimum difficulty.

“There is naturally a great deal of excitement about the future of research at the University of Greenwich and these roofs are already helping students and staff to extend their understanding of environmental infrastructure and of landscaped and green spaces across increasingly urbanised areas.”

The 14 interlinked terraces have already received a BREEAM Innovation award due to their educational and research aims.

Blackdown green roofs from Alumasc are constructed from a range of components that replicate the natural growing environment for plants, without requiring the same depth and weight of construction. Green roofs absorb CO2, improve a building’s thermal performance, increase rainwater retention thereby reducing storm water run-off, and reduce the life-cycle costs of a roof by protecting it from climatic changes, UV light and mechanical damage. 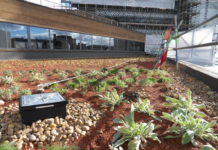 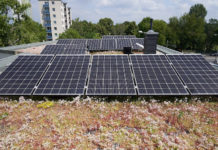 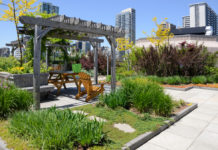 How to mitigate hazards on green roofs

Alumasc on target for WWII bunker